“What Size Circuit Breaker Do I Need For A Dryer?”

But don’t assume that’s the case for your particular dryer. To see what size you need, check out the back of your dryer.

Most dryers have a sticker or metal faceplate near the bottom of the unit that displays this information. 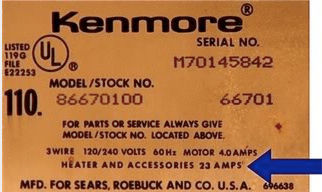 An example of a sticker on an older dryer model that uses 23 amps. Most modern dryers now use 30 amps. Photo source: Photobucket.com

So why is it so important to find the right breaker size for your dryer?

We’ll explain. First though, let’s look at how a circuit breaker works.

How a circuit breaker works

A circuit breaker monitors the flow of electricity on a particular circuit. If the current flowing through that circuit reaches an unsafe level, the breaker “trips” and cuts off power to the circuit.

So, when a circuit breaker trips, it’s protecting that circuit from overheating and potentially causing an electrical fire.

When the electron flow (seen in blue) is too high for that circuit, your circuit breaker “trips” to the OFF position. Photo source: howequipmentworks.com

Think of a circuit breaker as a traffic light that is in charge of the flow of traffic on one particular road. As long as there is a steady and safe amount of cars on the road, the traffic light stays green. But when too many cars travel down that road at once, the light turns red and halts traffic altogether.

That red light is essentially what happens when the circuit breaker “trips” and breaks the flow of electricity.

Note: Want a better understanding of your home’s electrical system? Check out our article, Home Electricity 101.

So, what happens if I install a circuit breaker that is too low?

A circuit breaker comes with preset “directions”. A 20-amp breaker’s directions say to cut power when anything over 20 amps tries to flow through that circuit.

If you install a circuit breaker that is lower than 30 amps, your breaker will trip every time you use that dryer because the appliance will always draw more amps than the circuit breaker is designed to allow

Related: Why Does My Circuit Breaker Keep Tripping?

What happens if I install a circuit breaker that is too high?

If you install a circuit breaker that is too high, you’re putting that circuit at risk of dangerous levels of current that can damage your dryer or cause an electrical fire.

A circuit breaker that is too high won’t cut power to the circuit when electrical flow exceeds safe amounts.

Let’s say that you install a 40-amp breaker on a circuit that is designed to only carry 30 amps.

A 30-amp circuit uses wiring that can only handle 30 amps of electricity, which means anything over 30 amps flowing through that circuit will cause the wires to overheat.

So, a 40-amp breaker would potentially let unsafe levels of electricity course through that circuit and never trip until the flow exceeds 40 amps. But by then, the wires have plenty of time to overheat, possibly causing a fire.

Need a Florida electrician to install your circuit breaker?

We don’t suggest trying to install the breaker yourself as this could result in electric shock.

Get a licensed electrician from Energy Today who can install your breaker quickly and correctly the first time. We serve Tampa Bay, Central Florida, and SW Florida with locations in Sarasota, Tampa, Orlando, and Naples.